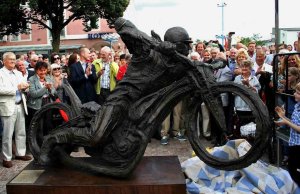 The statue of Ove Fundin, five-times World Championship speedway rider, was unveiled last August in his hometown of Tranås in Sweden. He is my father and I met him for the first time when I was 30.

One Weekly Blog Club optional theme this week was a ‘public statue in your locality’. I am not from Tranås: I was born in London at a Catholic children’s home and moved, at six weeks, to my adoptive parents’ home in Folkestone.

My biological father’s seven children lived in and around Tranås: a town of just over 14,000 people in the south-west of Sweden where his family had been prominent furriers.

I have four-half brothers and three half-sisters: one of my half-sisters is just two days older than me. It is a strange thought, being born so close together; her life has seemed one that I might have had. It was and is very different from my own: horses and school skiing lessons, a big country house and lots of siblings. It was also one with a largely absent father who went on to marry twice more, the loss of that country house, a mother who married again and a step-brother.

My father is described by his biographer as ‘an idol [whose] ruthless pursuit of success…often upset the British crowds.’ He is volatile and complex, generous and courageous; he has travelled all over the world and has marked his birthdays from the age of 70 by walking from France to Sweden, for example, or motor biking to Sweden from South Korea.

I know that my half-sister often had to take care of her younger siblings. Like our father, she has successfully fought cancer. She is tall and striking, learned to parachute and drive lorries, has five children and a former partner called Adolf (being English, that strikes me as one of the biggest differences between us.)

I am very short, have one child and parents who have just celebrated their 58th wedding anniversary, still living in the dolls house-sized semi where I went at six weeks. I had one adoptive brother, severely mentally ill from a young age.

My parents have never flown or driven a car: Dad did a moped course but was too nervous to give up his pushbike. Mum stayed at home while my half-sister’s mother still works as a journalist and author. It is all so very different. My parents’ life is family and church and walks around the cliff, no black tie dinners or winters in Australia.

I went to a town council-hosted lunch and dinner for the statue launch, heading off to sleep after a couple of glasses of wine in the evening. My half-sister and the others have a Scandanavian tolerance for a long rowdy night of spirits and socialising.

It has taken a long time to write this but it comes nowhere near conveying the sense of trying to convey the wonder of what makes each of us ourselves and unique. Time to stop trying.

View all posts by karenatstepney

5 thoughts on “A life not lived”