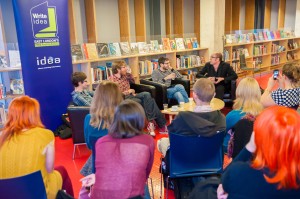 I will be 52 in April and am getting used to the idea by saying so now. I was going to write a list of 52 facts about me but think this is better because I can fit more in a short space.

That’s four already … or even five, depending on how personal this week’s Weekly Blog Club theme-setter, lovely Kate Bentham, thinks ‘some facts about yourself’ should be.

I’ve loved comics since I was small and the picture above makes me happy. This is partly because it only shows the back of my head but mainly because I’m listening to a debate on the future of comics as part of November 2013’s Writeidea Festival Fringe.

I was a volunteer on the organising panel and am delighted that I managed to suggest and bring in some brilliant speakers. They included a former executive producer of Eastenders, Diederick Santer, who is the brother of my friend Hen; he debated soaps with an Archers scriptwriter who came to my wedding reception, Mr Keri Davies. There was best-selling historical master of the medieval murder mystery Michael Jecks who I had last spoken to nearly 16 years ago at Lingfield Races.

Among others I asked were Booker nominee Alison Moore and fellow SALT-published novelist Simon Okotie, who made me cry with laughter one morning with two words (‘Hulk, smash’. Spoken by a mild-mannered Buddhist, this was for some reason hysterical.) I also asked one poet –  Maitreyabandhu, another Buddhist – a man I greatly admire for his humour and  work on mindfulness for people with depression.

I approached some people through Twitter: Stella Duffy, genius writer, campaigner and generous woman. Her blog post this week made me cry. I want you to read it and I wish her every positive thought I can offer. Melanie Clegg is wonderful Madame Guillotine, an observant and beautifully-descriptive cultural cockney who rocks blue hair in a way that (colour clash) turns me green with envy.

It made my day to have Robin Ince agree to headline the Saturday and spend time chatting with me and my daughter beforehand. Being good at English when I went to school meant ditching science and I wish with all my heart I had his dedication to educating himself in so many scientific areas.

I went to Robin’s Nine Lessons and Carols for Godless People before Christmas. I think my favourite on stage was hedgehog-loving author and ecologist Hugh Warwick. My first pet was a hedgehog called Murphy, given to me when I was nine by workmen who’d found him. I adored him and was inconsolable when he wandered next door and ate slug poison.

Back to the picture above. The red hair (I wish I had the nerve to dye mine like it) and yellow dress belong to Nat Guest. I think she probably has the best username on Twitter: @unfortunatalie  I first spotted her online because of her invention of the superb Question Time Tweetalong events; I went to one at the Hackney Attic. I’d suggested the festival have a fringe for the first time and asked her if she would curate the two days.

I suspect by the time she’s nearly 52, Nat’ll be Prime Minister. If she wants. She has a network of intelligent, well-connected and creative people that makes me feel out of touch, dull and slack-jawed. She can also drink me under the table.

I’m looking forward to helping out again this year, with Writeidea 2014.

*I bet you knew that was a quote from Dickens’s Hard Times. And that’s 52 facts about me.