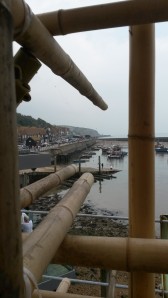 I’m glancing through the Folkestone Triennial 2014 brochure I bought yesterday: the page is open at The Electrified Line, by Gabriel Lester.

The brochure notes how the sculptor valued the aesthetic presence of bamboo scaffolding while he was in China. His sculpture ‘proposes the coming ‘Chinese century’ in Folkestone’s heart.’

In the background, the BBC Radio 4 Today programme advises British businesses how to invest in China. It seems a good place to start a quick post on the first few works I visited yesterday. Please don’t think this is even a vague attempt to look at the Triennial with any form of critical eye: it’s just personal experience.

Our party comprised one would-be art appreciator, a local now based in London (me); a bolshy 17-year-old whose potential love of art has been largely trashed by GCSE drudgery but likes Gaudi (daughter, hereafter referred to as 17) and my mum (78) who likes nice pictures of flowers and the countryside.

They’re a good example of  ‘two fixed points determining the position of a third’, as described in the brochure. I’ll only get to go where they’re prepared and able, or can be persuaded, to visit.

From the brochure again: ‘The unofficial brief is create something ambitious, high quality, fun, surprising, challenging, and maybe a bit crazy: these things make an exhibition memorable and thought-provoking.’

I arrive home to much excitement. ‘There’s one of them headless chickens on the Martello Tower and you can see it lit up from your bedroom!’ Mum hands me a  piece of paper from one of the small notepads Dad bound when he worked at a printers.

She’s written down the different colours that roofoftwo’s Whithervane turns at night, depending on the output of alarmist words in the newsfeeds it monitors. On Saturday night, it’s green: fear levels are low. Mum is concerned that it’s been blue and whoever told her the colours hasn’t mentioned this. We agree it’s probably a nice colour.

The view from the tower is one of my dearest and best. I am allowed to walk to the end of the road for a look at the illuminated chicken, in the dark, on the promise that I won’t go up on the cliffs at this time of night. I am 52.

Sunday morning: I meet Best Friend for coffee. Best Friend is a very talented, though no longer practising, artist. We talk about the best-known work: Michael Sailstorfer’s Folkestone Digs. News of this had reached me on holiday in the forests of Sweden, with several friends emailing, texting and tweeting  that Folkestone was full of people digging for gold.

We agree that it’s fun, bringing optimism and life to the Outer Harbour. I admire her suggestion that all the digging should be filmed on timelaspse camera and then put on two minutes of video to the Benny Hill theme.

Her shop in the Old High Street is next door to Andy Goldsworthy’s Clay Window and Clay Steps. She’s watched its progress with fascination. I meet 17 and 78, who look into Georges House Gallery and its tiny 3D printed figures and chorus ‘Ooh no!’ at the idea of being scanned and turned into teeny  statuettes like The Luckiest Place on Earth.

We walk to Payers Park and I read aloud from the brochure about the ‘series of open-ended invitations to visitors to occupy and appropriate structures.’

At Something & Son’s Amusefood , 78 is enchanted and spends a long time talking to the attendant. The aim to produce fish, chips and mushy peas aeroponically is a response to the twin evils of obesity and food scarcity.

17 and I have talked about this very subject on the train, as it’s part of her A Level Geography course; she hadn’t known we’d visit this. She’s initially excited, then disappointed at the small scale, then saddened by trying to work out on what a huge level this would need to be to produce a meal on demand. It’s made her think.

A look at Clay Steps meets with hisses and mutterings about modern art from 17 and frank confusion from 78. Both are reluctant to enter the thick darkness of the shop interior, and then:

‘Oh! It’s so beautiful!’ 17 is impressed by Clay Window. 78 has a nice chat to the attendant about ‘her’ Whithervane.

Off to Electrified Line. It made an unexpected impact on me. I’m saving that for a separate post after I’ve gone back for another visit. 78 notes that she wouldn’t have gone up it if I hadn’t made her and she’s glad that she did: you can see the posh people having their lunch at Rocksalt and it’s the closest she’ll ever get to it.

We walk to the harbour and stop to stare up at Alex Hartley’s Vigil, eventually rewarded by a wave from the tiny, tiny hand of Em Peasgood. Please, please read her blog post here, from Saturday 6 September. One of the most moving and inspiring things I have ever read. What a truly brave woman.

17 has recently given up climbing after four years and is reluctant to engage with Vigil in any way. 78 is again frankly bemused. After a cup of tea at the Station Cafe – top hospitality there – we walk along the old platforms, reminiscing about the ferries. Tim Etchell’s Why is the Place is pronounced ‘very nice’ though it would look better if the railway line were weeded.

I am FURIOUS that the pilot station has been demolished and the only way I can see the work as it was installed is in the brochure. I hope it’s one of the works that becomes permanent but suspect the likelihood of vandalism will rule that out.

We walk along the Harbour arm towards Ian Hamilton Finlay’s Weather is a Third to Place and Time. I regret the silencing of the foghorn, which would have been a wonderfully mournful soundtrack on such a misty day. 78 says no, because it used to keep her awake. All three of us look through the telescope, in separate admiration.

There are faded knitted poppies along the rusting handrails. ‘I wonder if Prince Harry came along her,’ says 78. ‘He should of done.’

I have a five-minute dig for gold (nope) under the distant disapproving eye of 17. Then home to London but I can’t wait to come back.