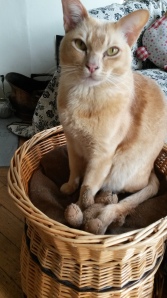 *uninspired sigh* ‘What shall I write my blog post about, beloved daughter?’

*looks up cheerfully from Biology revision* ‘Your paintings, what you’re thinking, a book, the view from your window, atrial systole and the sodium channel, those %$&^£! downstairs, Grandma, your work, your desk, why does Pouffeball [Loki the cat] get that black gunk in his eyes, funerals, that’s why they stopped Crufts, you know, Miss said, because of the pure-breds not being able to breathe, you know, look, he’s just like Henry the 8th, you know with that frill around his neck, you can just imagine him doing divorced beheaded survived, OH MY GOD LOOOOOOOK HE’S HOLDING ON TO HIS TEDDY!!! oh no he’s just got his claw stuck in it stupid Pouffeball I feel so sorry for myself, Falance [other cat] sneezed he’s so cute awwwwwwwwwwwwwwwww if only he didn’t hate every one Falance always ignores me*

My daughter Amelia is 17 tomorrow. This time last year, I posted 16 photos of her. She wasn’t happy. I thought I’d do something different, so I’m trying to get a snapshot of what she’s like, by looking at what she likes, aiming to shoehorn seventeen in awkwardly.

The photo of the girls, pinched from her Facebook page, was taken at the Federation of City Farms & Community Gardens annual harvest show. She’s been for the past few years with other young Stepney City Farm volunteers, The link shows a video made about the great work of the FCC&CG , featuring her being overly competitive with pride about an award-winning chicken. Show, Farm, chickens: three.

She’s just told Mum she’d like a duckling for her birthday. Same as she told me. Of course: what else for a fourth floor London flat with no outside space? And two cats. Ducklings make four.

Amelia’s on the right, with two of her four friends who’ll staying here tomorrow: wired on industrial amounts of sugar (I shall count ‘friends’ as making five in total, unless my deadline slips and I cheat to count them singly.)

She has several Pinterest boards. There’s ‘My cats :)’ featuring the love of her life: Loki. 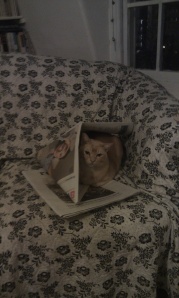 I rather like her caption to this: ‘Loki is perfectly normal.’ I’m counting both cats together to make six. And ‘South Park!!!!!‘ I shall say, with no further comment, that her favourite character is Cartman: seven.

‘Inspirations (well, a mix of my role models and favourite actresses/actors ect’ (proofing isn’t up there, sadly) can help get the numbers up: there’s a couple of photos from Buffy the Vampire Slayer alongside Withnail and Marwood from Withnail & I (Hurrah. Top parenting marks to me and nine.) And, oh dear, Dakota Fanning, for ten.

‘Game of Thrones’ mainly features Daenerys but has this (eleven):

‘Penguins’ is self-explanatory (twelve.) As is ‘Merlin :D’, if you think TV pretty boy rather than Malory’s Morte D’Arthur. I don’t think a week goes by without her lamenting its absence (thirteen.)

There’s ‘No Category in Particular’, with pics from Harry Potter, Dr Who and The Big Bang Theory (sixteen.) ‘Quirky Nails!’ makes seventeen and she can barely shut her bedroom door for nail varnish.

I’m going to cheat and sneak in an eighteen, as it will be her 18th year. Here is my opportunity to ruin all her future employment chances by displaying the four-letter word cover picture on her wonderfully-named ‘Muhahahahaha! (board of truth?)’ I think it sums up her sweet, quirky nature. Yes, I’m proud of her. Happy Birthday x 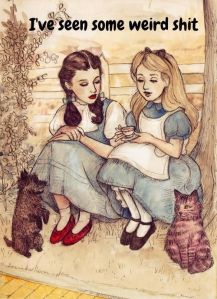 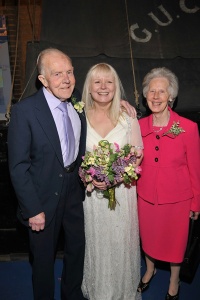 ‘But Mr Joyboy, you’ve given him the Radiant Childhood Smile.’

‘Oh, I like it, of course, but his Waiting One did not ask for it.’

‘Miss Thanatogenos, for you the Loved Ones just naturally smile.’

From ‘The Loved One’, by Evelyn Waugh

This afternoon I went to see my Dad, at a funeral directors’ chapel, in the oak mass-produced coffin Mum and I chose. I wanted a wicker one but was over-ruled on the grounds that it looked like a picnic basket.

Mum was also adamant that she did not want a ‘humorous’ funeral (English translation – Humanist.) She’s always been a modern-day Mrs Malaprop and has been telling friends and relatives how Dad slipped away in his sleep last week, despite the doctors’ attempts to resurrect him. No matter how many times I mutter ‘resuscitate’, she’ll carry on.

The last week’s been all phone calls and form-filling, priests and solicitors and sympathy cards. My favourite moment away from it all came when the lady in the cat sanctuary charity shop advised me, “Tell your mum to replace it as soon as she can.” I explained she had possibly misheard ‘Dad’ as ‘cat’. Much as I’d like the gap left by 59 years of being together to be filled by a tabby, I don’t think it works like that.

I’ve sorted flowers, recce’d hotels to arrange a tea for 80, written Orders of Service and discussed Bible readings (as an atheist.) Dad was a devout Catholic for 85 years, apart from a brief lapse during National Service in Egypt, to which his formidable mother put a stop on his return. I don’t know what he got up to and now I never will.

So there have already been requiem and other masses requested by friends, with a full-on service next week. I haven’t had much experience of dead people. I took a defiant glimpse of my grandad, against my parents’ wishes, when I was a teenager and spent several hours a few years ago beside a friend in his coffin at the London Buddhist Centre.

My own views of undertakers were largely informed by Jessica Mitford in The American Way of Death and Evelyn Waugh. I wrote a rubbish thesis on Waugh (rushed so I could spend the summer term watching cricket) and admire his writing beyond telling.

The tear-inducing sight of Dad’s delight in hospital at a priest coming to give him communion – when he no longer really knew who I was – has to be the closest to Lord Marchmain’s Brideshead Revisited death scene that I’ll experience in working class 21st Century Kent.

I’d supposed we would have to deal with someone like Mr Joyboy. I didn’t expect warm, funny, sarky female funeral directors, who have treated us with genuine care and concern.

Mum had dreaded today. Once she saw Dad in his suit, with the lilac shirt and tie that he wore for my wedding three years ago, all that dread went. All she could say was ‘It’s no wonder I fell in love with him.’ Then she hugged the funeral director for cleaning his nails nicely. 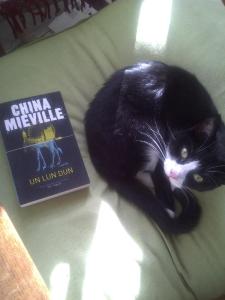 ‘But I tell you, a cat needs a name that’s particular,
A name that’s peculiar, and more dignified,
Else how can he keep up his tail perpendicular,
Or spread out his whiskers, or cherish his pride?‘
From T.S. Eliot, The Naming of Cats

This week’s optional theme, ‘what you are good at’, is the sort of thing to send me into a flap and then a non-Euclidean spiral.  I don’t think that I am good at anything. I asked my husband, who said some very nice things (evidently I know how to find places and am patient.) But it still feels uncomfortable to claim such qualities.

So I have decided to be random and claim to be good at naming cats. I base this on a statistical sample of two: Falance Boo and Loki-Pancks Gobbolino. Falance came to live with us when my daughter was six. Her suggestions, such as ‘Rainbow Princess’, were rejected on the entirely reasonable grounds that (a) he was a boy, (b) he would be taking up residence on a rather rough East London estate and (c) they were rubbish.

‘Falance’ comes from a lovely book called The Witch’s Boy. He is a magical cat who agrees to become a man. I like it because it’s unusual: we’ve never met another Falance-cat. A few people mis-pronounce it as Valance and I can only assume they think it is a tribute to the home of the Krays, Vallance Road, a few minutes walk from here. ‘Boo’ came from her desire for him to have a middle name: he used to jump out a lot. Falance is a black and white British shorthair – or moggy – and the most unfriendly, stand-offish cat in the world.

It was heart-breaking, watching my daughter’s attempts to cuddle him or get him to sit on her lap. Worrying that she would become permanently disfigured or infected by claw attack, I fell for the ‘Get a Burmese; they’re like dogs’ line. We did and he is.

‘Loki’ is of course the mischievous/evil Norse god, who ultimately brings about Ragnarok: the end of the world. The cat works tirelessly towards this, not least by regularly chewing through any power cable left outside of a locked cupboard.

‘Pancks’ comes from the character in Charles Dickens’s Little Dorrit. The BBC series was on when the cat arrived, making the same weird sound in his throat that the brilliant Eddie Marsan did in his portrayal.

‘Gobbolino‘ is another witch’s cat: one who just wants to live with a family and be loved. For reasons still far from clear, Loki-Pancks has come to be known as ‘Piggle’…
‘But above and beyond there’s still one name left over,
And that is the name that you never will guess;
The name that no human research can discover–
But THE CAT HIMSELF KNOWS, and will never confess.
When you notice a cat in profound meditation,
The reason, I tell you, is always the same:
His mind is engaged in a rapt contemplation
Of the thought, of the thought, of the thought of his name:
His ineffable effable
Effanineffable
Deep and inscrutable singular Name.’