My daughter is one of only two white girls at her East London school of 1,400. She may be the only one; she is unsure about a fleeting glance she caught of a younger girl. Nearly all of her Year 12 friends are Muslims, from Bangladeshi or Somali families. They’re studying science AS levels and want to go to university. Just like my daughter.

Most of the girls wear headscarves. She was excited at going on a residential field trip a few weeks ago: “I’ll get to see their hair!” They spent the evenings chatting and giggling, swapping sweets and studying. Just like my daughter

Over the last few days, my daughter has got swishy new specs from a hip new City optician. She’s been on a day trip to the Royal Veterinary College: her first university visit. There were lots of girls, practising sutures and listening to lectures, full of plans for their careers. Just like my daughter.

She’s watched Game of Thrones and gazed adoringly at Jon Snow (even though he knows nothing), and been angry and upset by the rape of Craster’s wives: some of them just young girls. Just like my daughter.

And back in a world as random and horrific as anything Westeros can devise, she’s been shocked beyond telling, reading about and listening to the news about the girls in Nigeria. Girls of 17,  sitting their  exams. Girls from loving families. Just like my daughter. 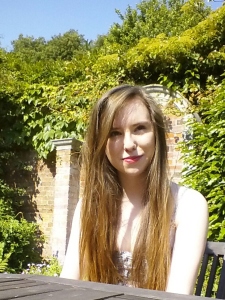 A levels, GCSEs: it’s the annual round of results and debates on whether it was tougher back in the day.

I don’t know about the grades. I don’t feel qualified to judge whether modular systems are fairer than an exam at the end of a course of study.

I did old school O and A Levels. Tough, yes. But I think she has it tougher because I was able to have a summer off from studying before Sixth Form started.

My 16-year-old scientifically-minded daughter picked up an AS result yesterday: a surprisingly decent grade in History. The surprise was that she hates the subject and hadn’t wanted to study it. It was the only subject she could fit into a timetable designed to meet curriculum requirements with required core subjects.

Her school in Kent takes exams early so she already had all government-imposed qualifications, except one. As she had to retake German until the alphabet ran out of letters at its rear end, the timetable left her with a History AS on top of her additional GCSEs.

Study doesn’t come easily to her and I think she deserved a summer kicking back a bit. The photo shows her on her last real day of rest during three days in the New Forest back on 15 July.

That’s the day she was given summer holiday work tasks for starting A levels in Biology, Chemistry, Geography and Physics. These have kept her occupied every single day since.

She’s read ‘Why does E=MC2? by Brian Cox and Jeff Forshaw’ and ‘The
Selfish Gene’ by Richard Dawkins and is working on ‘The Elements of Murder: A History of Poison’ by John Emsley: all three books  need a written review.

There’s an assignment on the state of the oceans for each of the science areas and 15 news articles to find and review to cover a list of geographical issues.

She’s working harder this summer than I ever did after a round of exams. What might be a surprise to some is that she’s leaving the Kent grammar, where her friends are having a summer off. She’s not heading for a public school, where you might expect a summer spent cramming for a head start.

This is all for a state school in poor Tower Hamlets, where there’s the highest rate of child poverty in London.

Maybe this might help cut down numbers of the next generation of poor deprived kids here. And I hope she’ll  think it worth it, some day. Not now though: she’s too busy cursing poor Prof Cox.

My daughter is unlikely  to be attacked by a giant badger.

This makes me sad.

I am sad that, of course, there is no such thing as a giant badger. Such a disappointment. The innocent creature pictured featured in the Daily Telegraph, one of the news outlets that ran a story that a giant badger was terrorising the girls at her school. It claimed there were ‘hundreds of screaming, hysterical girls … too scared to walk across the school grounds’.

While I wasn’t too pleased about her language, I was delighted that her reaction was ‘WTF?’ She had seen no such thing: none of her friends had even heard of the GB until she posted a link on Facebook.

It is a pity that she is unlikely to experience being ‘charged at and then sniffed by’ the beast, reported elsewhere in a story that arose from one single unsubstantiated anonymous source. Those journalistic standards in a story about my old school in the town where I started work as a reporter also make me sad.

My main cause for sadness, though, is un-badger-related. My daughter will start a new school for sixth form in September. There’s a concrete playground but no fields for badgers of any size here.

What it does have, I found out yesterday, is a police escort at home time. This is because of a ‘fear of crime and violence in London’s East End’.

It makes me sad that I’ve often had to call the police where we live. I couldn’t bear to list the dozens of times and severity of incidents.

I’ve worked for the Metropolitan Police Service and the Home Office. I don’t call 999 lightly. The number of occasions on which they don’t turn up far outnumber those that they do.

If the police think home time is in need of this level of attention, there are worse things than giant badgers out there. And that makes me very sad indeed.

(‘Shame, really’ was the response to most things by Nanny in Nancy Mitford’s ‘The Blessing’. Today I am mos’ly channelling her. Nanny, not Nancy.  That definitely makes me sad.)