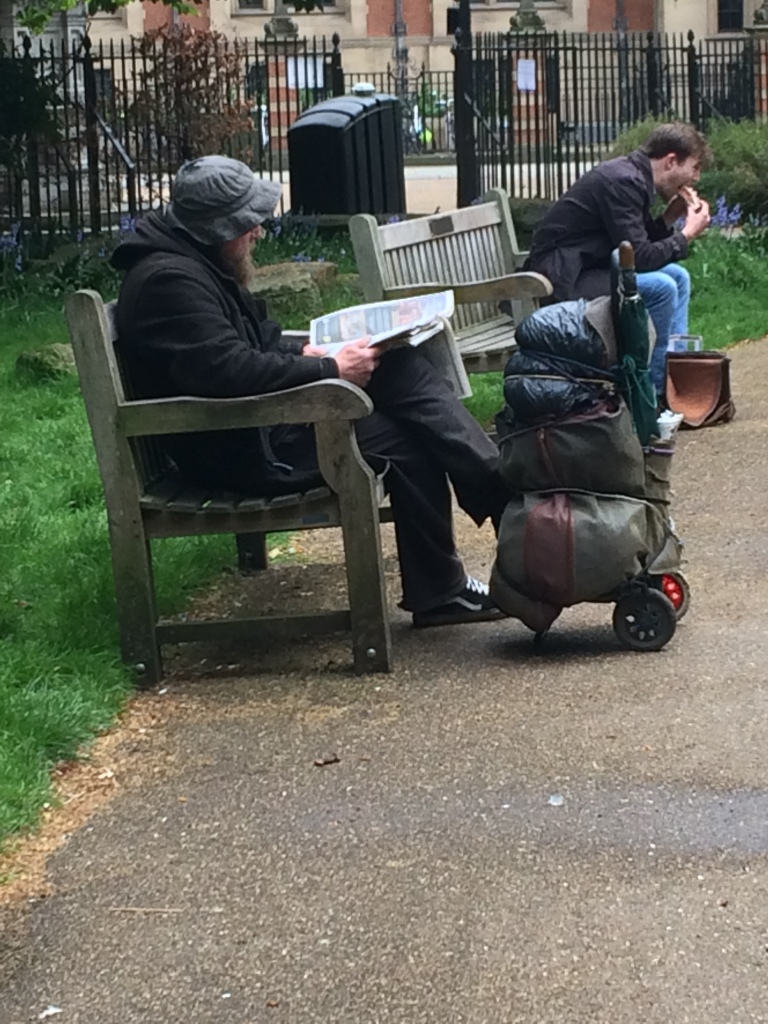 Written as a first exercise for a new Nature Writing course at City Lit.

I trudge past an effigy on a bench at the entrance to Lincoln’s Inn Fields: the first of several homeless men. I’m dragging my feet like a toddler, frowning and miserable in damp socks from the April shower earlier this afternoon.

I don’t want to be on this writing class nature walk in London. I do want to be back on holiday in the Chilterns. I want skylark song by hawthorn hedgerows iced with creamy blossom, the ‘tu-whoo’ and ‘kee-wick’ call and response of male and female tawny owls, and roe deer barking in the beech woods.

I picture the aerial ballet of soaring red kites, the wandering toad we found, and the brown hares – all heart-stopping four of them – boxing and jinking in the young wheat.

The mopeds and taxis and delivery vans along Newman’s Row whine and growl, and the first leaf to catch my eye isn’t even real. The frond of fern is stencilled in chocolate powder on cappuccino foam, advertising coffee at the inevitable cafe.

Lincoln’s Inn Fields is London’s biggest public square but today it’s a prison, wire fencing encased in tall redbrick and grey buildings. Last time I was here, my husband visited the Royal College of Surgeons‘ Hunterian Museum. I’d stayed outside, revolted by the fake nose of a woman suffering from syphilis, the 18th century skeleton of the so-called Irish Giant, and all the other weird shit that he loves.

The College buildings are shut for renovation until 2020, swathed in scaffolding and grubby plastic sheets. I turn away to crane my neck up at another giant: a London plane tree, as bulbous and deformed as any specimen at the Hunterian.

London planes shelter no wildlife, although grey squirrels may eat their spiky balls of allergy-inducing seeds. It’s not a tree to inspire folklore, unlike my favourite rowan: the Guardian tree of Swedish family gardens.

This monster isn’t the oldest London plane: that tree was planted in Bedford Square around 1789.

Perhaps the surgeon who removed my appendix in 1978 once sat in the shade of this tree. And maybe Miss Adams of Moorfields ate her lunch here. She should have a plaque, like others nearby to former College presidents: ‘Heroic straightener of my daughter’s eyes in two long operations.”

This veteran with its camouflage trunk is a healer too, with that flaky bark combating London’s pollution. “I suppose I rather like you,” I think.

Just along the path, my new classmate Jamie jumps up, child-like, to shake a cherry tree branch. It showers him with pink petal confetti, and I laugh out loud.